After the CPU era, in which computing speed was the main task, and the network era, in which information transmission, transmission and exchange were the main contradictions, information technology has now entered the information storage era, in which information storage and safe backup were the main contradictions. Since the beginning of the 21st century, the recording density of magnetic and magneto-optical recording storage has been greatly improved by developing new materials, improving the storage performance of materials, using high-performance soft magnetic materials as magnetic heads, reducing the size of recording spot, using multilayer coupling and super resolution readout. Disks can be up to 10 Gb/ IN2 and magneto-optical disks can be up to 20 Gb/in2. However, magnetic and magneto-optical recording bits cannot be infinitely small, and a recording density of the order of 100 Gb/in2 may be the limit for magnetic and magneto-optical recording. In the optical disk storage, people through the research and development of new organic photochemical materials, the use of short wavelength laser reading and writing, improving the trace density and line density, the development of most layer disks, improve the disk surface speed and other technologies, significantly improve the optical disk storage density and transmission rate. On this basis, the concept of holographic storage is proposed.

2. High data transmission rate and short access time. Holograms are stored and read on a whole page, with all the bits of information on a page being recorded and read in parallel. In addition, holographic databases can be addressed by means of inertial-less beam deflection (such as acoustooptic deflectors) or wavelength selection without the electromechanical read/write heads required in disk and OPTICAL disk storage, and thus data transmission and access rates can be high.

3. High redundancy. Unlike bit-by-bit disks and optical disks, holograms store information in a distributed manner, with each bit of information stored on the entire surface or volume of the hologram, so local defects and damage in the recording medium do not cause loss of information.

4. High storage reliability. All holographic storage materials are silver salt crystal, organic polymer or metal compound crystal with good optical performance and stable chemical performance. Like the negative of a hologram, even if the storage carrier is partially damaged, the full data can still be read, but with reduced clarity. The information recorded by holographic storage materials can be kept for more than 30 years.

5. Parallel content addressing. Holographic memory can directly output the optical reconstruction information of data pages or images, so it can be used for parallel page oriented retrieval and recognition, and has fast content related addressing function. This unique performance can be used to build content-addressed memory. Figure 1 shows a comparison between conventional storage (a) and optical holographic storage (b).

FIG. 1 Comparison of conventional storage (a) and optical holographic storage (b). 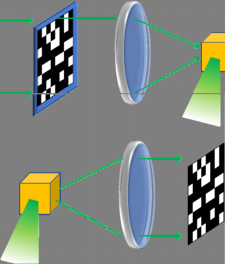 Until the early 90 s, along with the recording materials, spatial light modulator, the development of CCD detector and other key materials and devices, the storage density of the holographic data storage system can be greatly increased, the optical holographic data storage has entered a rapid development period, in the whole system, materials research and reuse theory has improved comprehensively.

In 1994, a joint organization of seven companies and university Research groups, including IBM and Stanford University, was partially sponsored by the Defense Advanced Research Projects Agency (DARPA), It mainly studies the optical Refraction information storage Material (PRISM), which is used in holographic storage. It is expected to develop a holographic data storage system with 1013 bit storage capacity and 1 Gb/s data conversion rate within five years. The material's test system, provided by IBM, not only stores and reconstructs the holograms of the big data pages, but also performs bit error rate analysis on the reconstructed results. The world's first complete holographic data storage system was jointly built by Stanford University, Siros, IBM and companies such as Rockwell and Thousand Oaks. Researchers at Caltech and Lucent have also demonstrated similar systems.

In 1994, DuPont company in the United States developed a Photopolymer based on free radical polymerization. Curtis et al. conducted an in-depth study on the holographic storage properties of this photo-polymer material product, and carried out holographic storage experiments using the cyclic multiplexing and Angle multiplexing techniques. Subsequently, Pu et al. made a holographic disc from this material and reused 32 holograms in each planar unit region to obtain a storage surface density of 109 bit/cm2. The sensitivity of photosensitive polymers is two orders of magnitude higher than that of photorefractive crystals, but the problem of material shrinkage is also serious, so it is necessary to find a balance between the dynamic response range and the shrinkage of the material. Bieringer explains this in more detail. Polaroid and Bell LABS researchers took different approaches to the material research problem. Polaroid used cationic open-loop materials for experimental verification, while Bell LABS and Lucent based on free radiation media for experimental verification.

We have done a lot of work on disc holographic storage of photorefractive crystals, and put forward a feasible scheme which can record and reconstruct the information better. Guo Yajun et al. compared the recording properties of lithium niobate crystals with different doping ratios and optimized the photorefractive crystal recording materials. Liu Youwen and Zhou Changhe et al studied double and triple doped lithium niobate crystals. Gan's team has done a lot of research on photopolymeric materials, which are easier to prepare, cheaper and more photosensitive than photorefractive crystals. Jin Guofan et al. have done a lot of research on the system problems of holographic storage, such as the Spatial Light Modulator, SLM) and CCD pixel registration problems, system miniaturization, SLM and CCD device performance within the page on the noise problem, the influence of the reference beam of off-axis holographic storage system to join displacement speckle and realize dynamic speckle multiplexing, can inhibit the crosstalk noise created multiple longitudinal mode laser, etc., mainly focusing on the research of off-axis holographic system.

After 2012, the era of big data came, and the market of data storage increased dramatically. The preparation of organic photopolymer materials has made great progress in recent years. Tan's team proposed phase-shaped holographic data

Storage method, and a lot of related research. Phase holographic data storage is becoming a research hotspot because of its higher storage capacity and higher SNR.