Analysis and Realization of Immersion Based on Virtual Reality Technology - Dr. Zhang Zhu

Virtual Reality (VR) integrates computer graphics, man-machine interface technology, multimedia technology, sensing technology and network technology into one. Its basic manifestation is computer simulation of Virtual environment so as to give people a sense of environmental immersion. Nowadays, the level of technological innovation has been gradually upgraded to the field of ecosystem construction. VR materials, VR production and VR application have become the basis of high-level, high-standard and high-level future transformation. In the future, the form of virtual reality will rise from "application of technical functions" to "collaborative innovation of ecosystem". The research on its technical characteristics generally focuses on three aspects: conception, immersion and interactivity. Conceivability: realize the generation of fictional scenes, which is a virtual image on the physical level; Immersion: a near-real perceptual experience based on a fictional scene; Interactivity: realize real-time control and feedback of virtual environment. Immersion is built by good interaction and proper conception.

On a technical level, immersion means the extent to which a computer display can provide a comprehensive, broad, three-dimensional, vivid illusion of reality. From the perspective of psychology, immersion is considered to be a psychological state, in which users will feel isolated from the real world [1]. As shown in Figure 1, information transmission is classified according to transmission modes and human factors. Among them, the most essential difference between Augmented Reality and Virtual Reality is whether the sensory experience of the real world is involved, regardless of the participation of immersion or display mechanism. Therefore, in the context of virtual reality, virtual reality refers to the subjective experience that really exists in the presented environment. The degree of presence in individual cognition is an important indicator to measure immersion. Many studies have shown that presence is positively correlated with human behavior [2]. For example, a strong sense of presence in young adults is reflected in better retention of mental concentration, better psychomotor ability, and better spatial memory compared to the young versus the old. However, in the virtual reality environment, the sense of presence may be weakened. For example, the virtual reality test in a limited environment or the virtual reality with strong dependence on the real environment will weaken the sense of participation and existence. Obviously, this will affect the user's immersion in the virtual reality. Since individual cognition is subjective, the relationship between individual cognition and individual existence indicates that in order to create a high-immersion environment, it is necessary to conduct optimal evaluation of individual cognition, so as to find the most suitable immersion state for individuals. Virtual reality is not only for individuals, and the current virtual reality equipment cannot create an exclusive immersion mode for each user, but it may be able to achieve it in the future [3].

"Halo 3D" is a potential limitation for the application and promotion of virtual reality. Nausea, headaches and disorientation do occur during VR experiences, and the presence of these adverse reactions could seriously hamper VR's applicability to people who are sensitive to these symptoms.

Although there is a mixture of "Reality" and "virtual" in virtual Reality, it can always be used as a collective term known as mixed Reality. Examples include VR-generated virtual environments completely superimposed on a related physical world, or extensive AR applications. As shown in Figure 2, in particular, in the continuum of MR, AR generates an RV hybrid environment in which most of the visual feel comes from the real world, and virtual elements contribute less. In enhanced virtuality (AV), the ratio of real to virtual can be restored, which is not discussed in this article. 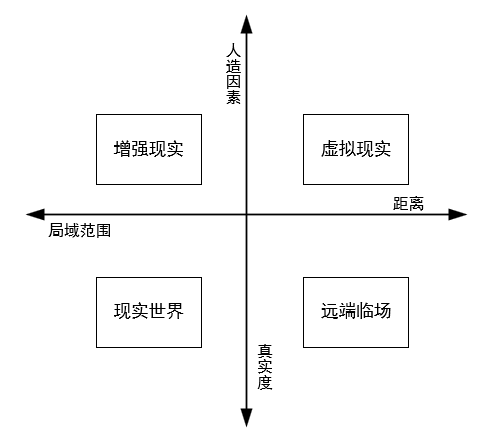 Second, the realization of immersion

A highly immersive experience has the following characteristics: omnidirectional, interactive feedback. The complex combination of hardware and software combines information from the digital and physical worlds to create a highly immersive, holistic, and authentic experience. Virtual reality system software is a set of software designed and developed to maintain a virtual "presence". The data presented to the user is filtered, usually including hardware, software, and algorithms. Hardware includes processors, displays, sensors, and input/output devices, while software and algorithms refer to how VR scenarios are implemented. Input devices are the means by which users interact with the virtual world. They send the user's action signal to the system and provide real-time feedback to the user through the output device. A computer with a VR engine is used to process the information that VR interacts with the user and provides the input/output interface of the device. For example, more powerful processing power and powerful graphics accelerators, or distributed computer systems interconnected through high-speed communication networks, can compute and generate graphics models, object rendering, lighting, mapping, texturing, simulation, and display in real time. The realization of immersive virtual reality is described from the perspective of real-time simulation of light and shadow and space collision detection.

2.1 Real-time simulation of light and shadow

1. Non-real-time rendering: Generally, the material attribute parameters of the light source and the scene object are set, and the illumination effect of the light source on the object is directly output into texture map through the auxiliary tool of the renderer in the graphics system. The illumination calculation of the object is not carried out during the display, but only the texture calculation. Non-real-time rendering allows sophisticated high-effect tools to render a scene for a long time, and then draw directly from the previously rendered data while browsing. This allows you to achieve good rendering quality while maintaining the speed of rendering. Its disadvantage is that it can not handle the dynamic light and shadow and the changing material well, and the calculation speed of the pre-rendering is very fast in the strong interaction. It is mostly used for the simulation of the light and shadow environment of large scenes. The typical technical methods are shadow mapping technology and texture baking technology.

2. Real-time rendering: complete the simulation calculation process of light and shadow through the hardware graphics acceleration card. Real-time rendering is that each frame is not set in advance, while the scene changes according to the actual light source and material property parameters at the time of illumination calculation. Each frame of real-time rendering is calculated according to the actual environment changes, and can respond to the user's input accordingly, providing a wealth of user interaction. Typical methods include: rasterization technology, ray tracking technology, and light energy transfer technology.

The accuracy and real-time performance of the user's interaction with the scene in the virtual reality system are the important indicators of the user's visual immersion in the virtual scene. With the increasing complexity of virtual scenes, collision detection has gradually become a difficult and hot issue, and the contradiction between accuracy and real-time performance has become more and more prominent, which cannot be satisfied at the same time. But when it comes to virtual reality immersion, both are indispensable. Of the real time collision detection to first ensure the authenticity of visual effect, and collision detection accuracy, can give the correct feedback signal, acting on the user's external devices, and this among them, external devices according to the real-time collision detection of the signal correct and action, reaction to the user, but also further improve the immersive from feeling and visual aspects.

Starting from the immersive sense of virtual reality, this paper analyzes the concept of immersive sense, and introduces the methods of how to realize or improve the immersive sense. There are many problems to be solved in this paper, such as how to solve the problem of "halo 3D" through technical methods, and how to promote real-time simulation of light and shadow to civil products.