The essence of the human brain is a network composed of neurons. The scientific community generally believes that the human brain has 100 billion neurons. The basic structure of neurons is shown in Figure 1. Each neuron has a large number of nerve fibers. Among these nerve fibers, dendrites account for the majority and only one axon (but can be bifurcated). Dendrites are responsible for receiving and transmitting information, and axons are responsible for outputting information. When the dendrites receive information greater than the excitability threshold, the entire neuron will generate a short but extremely obvious "action potential", which will spread throughout the entire neuron almost instantaneously, including the end of the nerve fiber away from the cell body. After that, the end structure of the "synapse" between the axon of the previous neuron and the dendrite of the next neuron will be activated by electrical signals, and the "neurotransmitter" will be released by the presynaptic membrane immediately. To transmit information between two neurons, and play a role in excitement or inhibition to the next neuron. 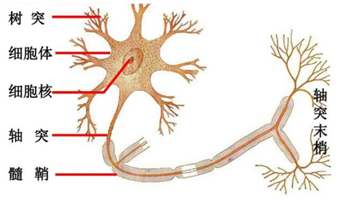 Figure 1 The basic structure of neurons

Among them, um represents the average somatic potential of the neuron, Cm and Rm are the input capacitance and resistance, respectively, and represent the finite impedance between the mth neuron and the output Vz, Vm=gm(um), gm(um) represents the response The input and output characteristics of the nonlinear amplifier with negligible time, Im is the input current of the mth neuron.

Virtual reality (VR), also known as virtual technology, is the use of computer simulation to generate a virtual world in a three-dimensional space, providing users with a simulation of vision and other senses, making users feel as if they are on the scene, and can observe three-dimensional space instantly and without restrictions Things within. There is no doubt that artificial intelligence and virtual reality are the two most popular words in Silicon Valley today. Neural networks are a form of artificial intelligence. A large number of Internet devices are like neuronal networks in the human brain. They can search for deforestation; they can also track global crops to analyze future food shortages; they can also Monitor global oil tankers, predict future natural gas, etc.

Imagine what it would be like to connect a (artificial) neural network to virtual reality. For example, by wearing a headset that transmits brain waves to control the actions and expressions of characters in virtual reality; using artificial neural networks to quickly create 3D objects to achieve the required virtual reality world, when we wear the virtual reality device, in a way of crossing Revisit the scenes and life of childhood hometown and so on.

Before realizing (artificial) neural network access to virtual reality, I think the following two problems need to be solved.

1. The acquisition of human emotions, that is, how the head-mounted device obtains accurate brain waves to reflect the positive or negative emotional response of the user to the stimulation of the virtual reality scene;

Currently, there is no mature solution for neural network access to virtual reality, but with the rapid development of artificial intelligence and computing science, it is believed that a large number of related products will emerge in the near future.