An introduction to classical methods of human behavior recognition in video data based on neural Networks - Dr. Wei Yao

Recurrent Neural Network [2](RNN) is A Neural Network suitable for video processing and capable of processing temporal data. Its structure is shown in Figure 1. Module A in this Network reads A certain INPUT XT constantly and then outputs HT. It can be seen from the figure that RNN circulates information to the next step, ensuring that the previous information can be saved in each calculation step. The chain structure of RNN on the right can be obtained by expanding the structure on the left. The chain feature reveals that RNN is sequence-related in nature. LSTM[3](Long Short Term Memory, LSTM) is a special RNN that uses the idea of RNN to study video behavior recognition tasks. Literature [4] proposes a Long term Recurrent Convolutional network (LRCN), as shown in FIG. 2. The principle of LRCN network structure is to input every frame of video into CNN network and then into LSTM, and the output of LSTM is the final output result of the network. By connecting LRCN with the traditional convolution module, a video behavior recognition model can be trained to capture the time-state dependence. In video behavior recognition, recurrent neural network generally needs to be combined with other network framework, the computational complexity is large, the video recognition effect is relatively ordinary. 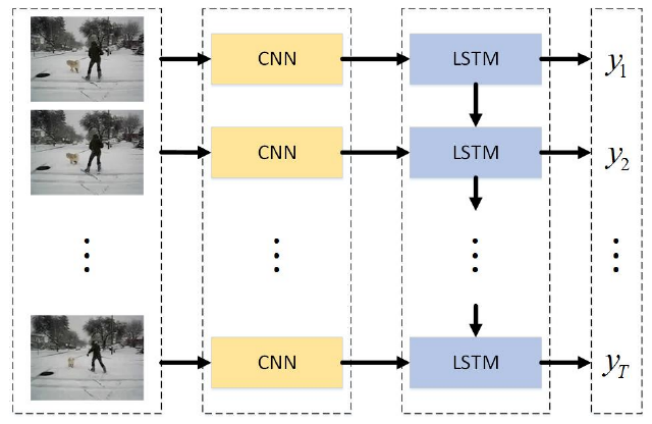 2 d convolution is usually used in image segmentation, identification, testing and other tasks, but in the field of video processing, 2 d convolution can well capture the information on the timing, as shown in figure 3, you can see by (a) figure multi-channel of 2 d convolution of the input is much frame picture, only the output characteristics of a two-dimensional figure, the characteristics of the multimodal information are compressed, The 3D convolution of FIG. (b) outputs a 3D feature map, which can capture the information on time sequence. Therefore, 3D convolution is suitable for processing tasks related to video. The Facebook team proposed a generic network C3D[5] for video analysis. The network structure is shown in Figure 4, with two full connectivity layers and a Softmax classifier at the back. C3D network for end-to-end training, direct input of video data, and then through 3D convolution operation to extract the spatio-temporal features of video data, the video time sequence information can be captured, and finally through Softmax classifier output classification results, the biggest advantage of this method is fast computing speed. The disadvantage is that the model recognition performance obtained by training medium and small video data sets is poor. In video behavior recognition, 3D convolutional network is usually end-to-end training, which requires training on a large video set. Compared with dual-stream network, 3D convolutional network has more parameters, and its biggest advantage is fast computing efficiency, but it has high requirements on computer hardware configuration.

Compared with the other two methods, the human behavior recognition method based on two-stream convolutional neural network in video data has the advantages of fewer computational parameters and low hardware configuration requirements, and the recognition performance of the model is also better.