Abstract: In view of the problem that the current skydiving simulation platform cannot fully restore the six-degree-of-freedom movement process of each phase of skydiving, a six-degree-of-freedom skydiving simulation training system was designed and implemented. The system structure of the simulator is designed, and the realization of the system of parachuting motion calculation, 6-dOF motion platform, control load, virtual reality view, body sensation creation and instructor console is illustrated. Compared with the same type of skydiving simulator, the system introduces a six-degree-of-freedom electric platform to drive the trainees to simulate various gestures of skydiving, which can help the trainees master the maneuvering movements of skydiving and enhance the attitude maintaining ability. At the same time, the use of virtual reality technology to restore 3d parachuting scene, training sense of presence, realistic effect, to improve the quality and efficiency of parachuting training and promote the construction of combat effectiveness of the army is of great significance.

Current our army military training into a large span and large development phase, the combat standards continue to improve, jump as a pilot with the paratroopers basic training course, has the characteristics of high strength training, training the difficulty, the existing training methods, mainly to parachute tower attempt with field not only hard to organizational guarantee, and there is great risk, need to expand training means, Improve training benefits. Parachuting simulation training system is a simulated training device based on the dynamics of human parachute system, which provides a realistic parachuting environment for the trainer by suspending him under the platform and combining with human-computer interaction technology. Due to its advantages in reducing the training risk factor, enhancing the adaptability of the training environment and reducing the training cost, it has gradually been favored by various countries. European and American countries started early in the development of skydiving simulators, and skydiving simulators based on virtual reality technology have been popularized in military training, such as VRPT2 skydiving simulation training system purchased by the British Ministry of Defense and ParaSim5 skydiving simulation training system introduced by the US Air Force. With the development of VR virtual simulation technology in the past two years, useful attempts have been made in China, including paratrooper Academy, Shanghai Efei Electronics, Beijing Huaru Science and Technology and other military units have launched various types of parachute simulation training systems, and deployed troops one after another, and achieved good training results. However, by analyzing the technical solutions at home and abroad, the existing skydiving simulation training system generally adopts the cylinder driving platform, which controls the posture of the trainer through the up and down movement of the cylinder, and then simulates the skydiving process. On the one hand, due to the large size and slow movement of the cylinder, the simulated parachute movement often does not match the movement settlement results. On the other hand, the existing platform can only realize the control of forward and backward, up and down, and left and right movements, which cannot fully restore the actual six-degree-of-freedom movement process of each phase of parachuting, and the attitude control training of parachuting is seriously missing. Therefore, how to improve the skydiving simulator manned movement platform, solve the control problem of the new platform, and dynamically simulate the full freedom movement process of personnel in the training by collecting the trainees' control of the parachute in real time, has become the technical problem to be solved urgently in the existing skydiving simulation training system.

(1) Specific umbrella type. The parachute model is built according to the specific parachute of a parachute training, and the parachute module is reserved for expansion interface, which can provide support for the subsequent addition of new parachute.

(6) The final evaluation of the operation process of the parachutists is carried out according to the steps and situations. It has the function of replay evaluation and action assessment of the whole process of practice, to judge whether the operation is correct and the influence it brings.

(8) The system design is extensible. It can carry out secondary development of the platform and reserve interfaces to realize simulated formation parachuting training in the future.

The hardware of the system is mainly composed of two parts: the instructor console and the simulated parachuting area. The overall appearance is shown in Figure 1. The simulation parachuting area is composed of simulation unit frame, 6-DOF dynamic platform, strap module, control module, VR virtual glasses, air supply device and so on. 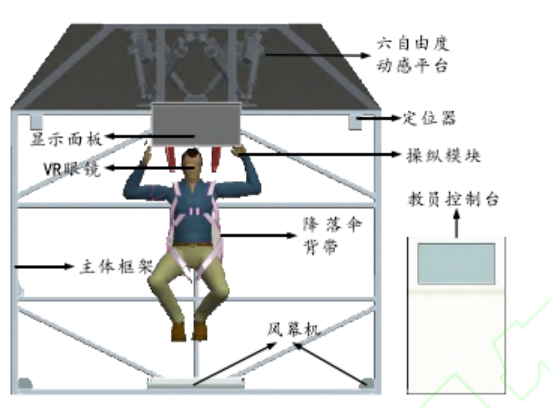 (2) A 6-dOF dynamic platform, which is hung upside down on the unit frame to provide a dynamic simulation for the skydiver during the process of parachuting. The mooring interface is left on the motion plane of the moving platform, which is used to install tension sensor and parachute rope and other equipment;

(3) The rope and the control belt are installed on the six-degree-of-freedom motion platform through the tension sensor, and the lower belt system is fastened;

(4) Harness system. The harness module is partially connected to the control platform and partially pierced on the trainee's body. It is used to suspend the trainee in the air on the one hand, and carry out operation training of different umbrella types on the trainee by using the corresponding ring pull on the harness system on the other hand;

(6) Helmet module, the helmet module is worn on the head of trainees, including virtual reality glasses and data cables, to provide trainees with continuous dynamic large-view 3D parachute environment display; 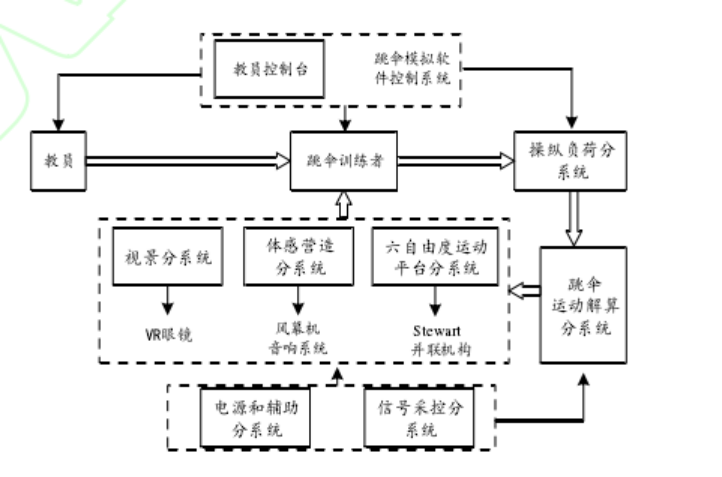 The function principle of parachuting simulation training system is shown in Figure 2. Trainees hanging on by a rope and manipulate under six degrees of freedom motion platform, manipulate umbrella rope TAB or belt, provide input signal to control load system, control system to collect control signal input load skydiving decoding system, six degrees of freedom in people - umbrella system dynamics model on the basis of numerical calculating, Output the motion state information of the man-parachute system to the visual system, the 6-DOF motion platform system and the somatosensory construction system. After receiving the motion state information of the man-umbrella system, the visual display module will update the visual information and feedback the trainee's vision. After receiving the motion state information of the human-umbrella system, the 6-DOF motion platform generates the corresponding dynamic simulation, drives the platform and the trainees to move, and feeds back to the trainees' sense of touch. After receiving the motion information of the human-parachute system, the motion building system generates the corresponding wind effect and sound effect through the air curtain machine and sound, and feeds back to the pilot's hearing and touch. Then realize a person in the loop virtual simulation system. During the operation of the simulator, the instructor console can complete the functions of task management, condition parameter setting, data recording, simulation reproduction, data output and evaluation through a series of internal control software. The instructor can monitor the movement state of the trainees in real time through the console, and can also intervene in the training process through the computer.

The training is carried out as follows:

(1) In the initial state, the motion sensing platform drives the jumpsuit to the lowest point, and the parachutist wears the elastic jumpsuit to ensure that the jumpsuit is tightened when standing, and VR glasses are well worn at the same time;

(3) to simulate the parachute jump, jump personnel by VR glasses to see the whole simulation training of the scene, and through solid lock tractor to control the descent direction and location, at the same time, simulation software will gesture data real-time transmission to the motion-sensing simulation platform, the body feeling platform makes the corresponding action, let the skydivers can feel sideslip, acceleration of gravity, and open an umbrella when pulling sense;

(4) When landing, the platform will make a corresponding descent action through the height signal fed back by the software. When landing in the software, the parachuters' feet just touch the ground; 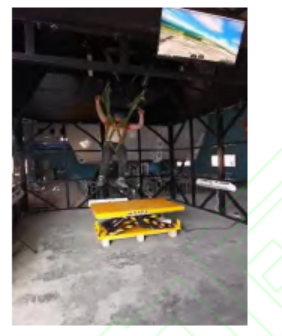 This paper describes the design requirements, hardware and software configuration and functional characteristics of a 6-DOF simulation parachuting training system from the aspects of overall system construction, subsystem implementation and training process design. The system realizes the full posture simulation of parachuting process by introducing a 6-Dof electric platform. Through motion simulation, manipulation feedback, attitude control and virtual vision, trainees can be completely immersed in the simulated training environment, which can help trainees master the basic movements in parachuting, enhance the attitude maintaining ability, greatly make up for the shortage of traditional parachuting training means, and improve the training quality of parachuting