Remote driving of vehicles based on virtual Reality technology - Dr. Li She

Abstract: Unmanned driving and artificial intelligence are hot topics in the field of vehicle research. Considering the test cost, how to conduct road test of unmanned vehicles in virtual environment has become a new research direction. In driverless experiments, a driver is required to maintain control of the vehicle in the test vehicle, which undoubtedly increases the risk of injury. Remote driving, on the other hand, not only preserves the driver's control of the vehicle, but also reduces the risk of injury. At the same time, in the field of mobile robots, remote driving also has a good development prospect.

With the continuous progress of sensors and machine learning, many domestic and foreign passenger vehicle manufacturers are aiming at the development direction of unmanned and intelligent vehicle driving [1]. The rapid rise of vehicle autonomous driving technology has promoted the rapid heating up of unmanned driving industry. However, if complete driverless driving is realized and put into actual operation, there are still many technical difficulties at present, and it cannot reach all-weather and unstructured road driving [2]. It will take a long time for driverless technology to develop from its initial exploration to its full development and popularization [3].

Driverless technology is mainly faced with the development limitations of many technologies such as road status identification, vehicle control and vehicle information interaction [4], and a series of social problems [5] such as ethical norms, legal responsibilities and regulatory policies have gradually emerged. Road condition recognition and environment perception based on artificial intelligence are one of the most important technologies of driverless driving. Vehicles need to accurately identify and make corresponding judgments on pedestrians, passing vehicles, traffic lights, etc. [6]. However, in recent years, Uber, Google, Tesla and other self-driving car fatal accidents [7] have raised greater doubts and challenges to the current road condition identification technology. Figure 1 shows the accident scene of a self-driving SUV of Uber. 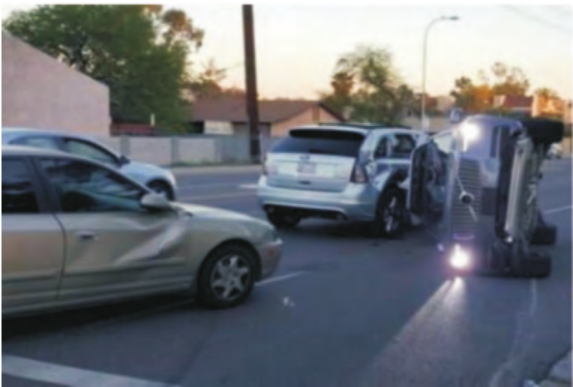 Remote control technology was first proposed in the early 20th century, and with the emergence of computer technology, wireless communication technology, sensor technology and other emerging technologies, it has been widely applied in various fields such as sea, land and air, affecting all aspects of human life [9]. By using remote control technology, machines or equipment can reach difficult environments that are difficult for humans to reach, effectively reducing work costs and avoiding casualties [10]. Reliable navigation, effective motion control and real-time acquisition of positioning sensor data are the keys to vehicle remote control technology [11]. The traditional remote control technology of the vehicle is to realize the control of the vehicle by analyzing the current environment of the vehicle by the operator based on the images returned by sensors and cameras installed on the vehicle, and then making decisions to adjust the attitude of the vehicle. Blind spots can be created because of the limited number of sensors and cameras installed on vehicles. In addition, the operator's sense of presence is not strong, the operation accuracy can not be guaranteed. Communication technology also limits the real-time performance of data transmission, making it impossible for the remote operator to adjust the control of vehicle motion attitude according to the change of environment. Because the remote vehicle can only rely on human behavior decision to move, but the operator cannot fully obtain the vehicle and environmental information, when the vehicle faces an emergency situation, due to the lack of certain autonomy, such as obstacle judgment, environment perception, etc., the remote control of the vehicle fails. With the vigorous development of machine learning, artificial intelligence and other emerging disciplines, the degree of intelligence and autonomy of vehicles is becoming more and more high, providing a new starting point for remote driving of vehicles. In addition, with the development of 5G network, the characteristics of super-large bandwidth, ultra-low latency and ultra-high reliability effectively guarantee the real-time transmission of data [12], and also provide reliable communication guarantee for remote driving of vehicles. On June 27, 2018, during the Mobile World Congress (MWC) in Shanghai, China Unicom, together with Ericsson and Yu Zi Technology, conducted the first 5G ultra-remote driving real car demonstration in China and achieved success [13], as shown in Figure 2. 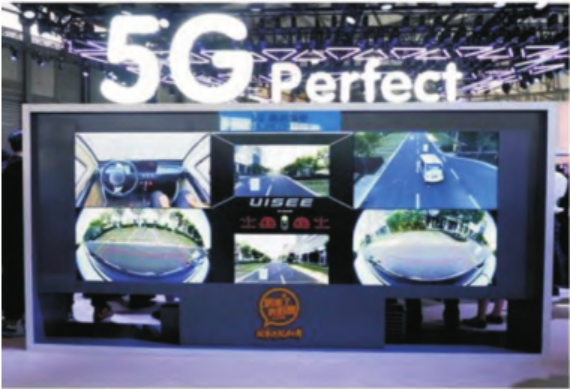 Virtual reality technology has strong Immersion, Interaction and Imagination, namely the so-called 3I characteristics [13], which has gradually penetrated into all fields of science and technology in recent years. At GTC 2018, Nvidia showed how users can control a car remotely by combining the Holodeck with VR Settings including the HTC Vive, driving racing seats and steering wheel, and a car with a remote controller. A major focus of its demonstration is the autonomous vehicle and AI autonomous driving platform DRIVE[14]. Due to the late research of driving technology in virtual reality environment, China still needs further development to gradually narrow the gap with developing countries in the new historical environment, so as to realize stronger and more immersive virtual simulation technology.

In August 2016, product Design company in silicon valley 219 Design team developed a can use HTC Vive virtual reality helmet control arm, can allow the user to accurate and intuitive real-time control arm, and his arm trajectory can be recorded after the robotic arms in response to a command can simulate user record arm movement, Thus, the manipulator is "taught" to realize the specified action [15]. In October 2017, MIT's Computer Science and Artificial Intelligence Laboratory (CSAIL) created a new virtual reality headset that allows operators to remotely control a robot using an Oculus Rift headset and a Touch handle, and even use a manual controller to directly control the robot's arm [16]. According to foreign media reports in December 2017, NASA and SONY are using PlayStation VR to develop a demo app called Mighty Morphenaut to practice how to control humanoid robots in space [17]. In January 2018, Brown University computer scientists developed software that allows users to immerse themselves in a robot's surroundings and control it from thousands of miles away. The software connects the robot's moment arm gripper, camera and sensor to VR hardware via the Internet. With the help of a hand-held controller, the operator can control the moment arm of the robot by simply moving his or her own arm, thus completing complex operation tasks [18].

China's relevant enterprises are also committed to the RESEARCH of VR remote control. At present, Baidu and SAIC group are in a relatively leading position in the research of virtual driving of unmanned vehicles in China. 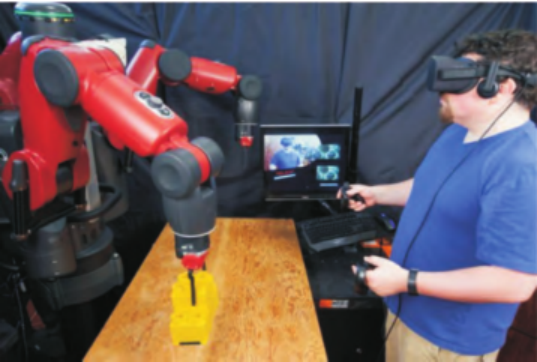 Therefore, combined with the virtual reality technology, comprehensive development of modern communication, and improve the degree of autonomous vehicles, through the virtual environment to complete the comprehensive observation and control of unmanned vehicles, realize vehicle virtual remote driving, not only can effectively solve the unmanned vehicle is currently faced with environmental problems such as inadequate recognition, vehicle control inaccurate, but also can ensure the safety of vehicle, It can also make the operator have the experience of driving in its own environment.

With the continuous development of digital technology, virtual driving technology based on virtual reality is making continuous progress. Virtual driving technology has also been applied to the road test of unmanned vehicles and driver training from the study of car simulator. The virtual driving system is mainly composed of control system, visual simulation system, driving simulator [19], audio equipment, display and other components. Among them, the control system for physical objects, including the steering wheel, accelerator pedal, brake pedal and gearshift, drivers change the movement of vehicles in a virtual environment by control system, visual simulation system for vehicle attitude, and pass through vehicle information display drivers, the driver in time perception vehicle motion posture and traffic environment change; The driving simulator adjusts the orientation and Angle according to the changes of the vehicle's motion posture, so as to keep the driver's attitude consistent with the body posture, and enhance the experience and authenticity. 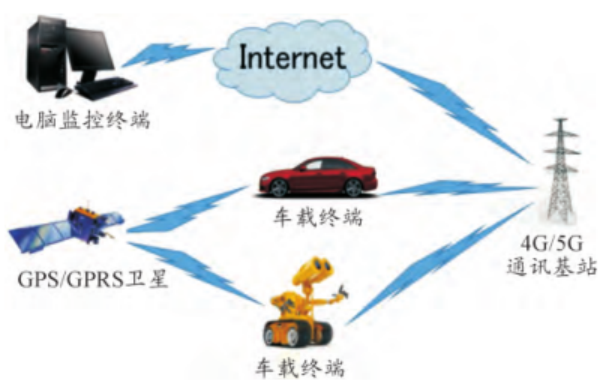 The main position and attitude information of the vehicle is collected through satellite positioning and sensors and transmitted to the operation interface of the monitoring personnel through the network. The operator analyzes and judges the information and issues relevant commands to realize the adjustment of the vehicle motion attitude [20]. Remote control system mainly transmits information through wireless network. The emergence of 5G network provides a good way to solve the problem of communication delay.

Virtual car is in the virtual environment through the vehicle dynamics model, road model, tire model and so on to achieve the vehicle driving, while real car is on the actual road surface for driving. Due to the influence of modeling accuracy, in order to ensure that the position and pose of virtual vehicle and real vehicle are as consistent as possible, based on the analysis of virtual driving system and vehicle remote control system, the structure diagram of vehicle remote driving technology based on virtual reality is established, as shown in Figure 5. 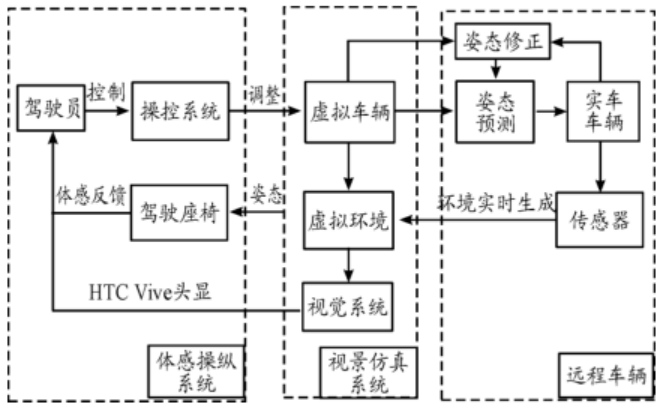 Operators wore a VR head show, show in virtual environment by observing the head motion state of the vehicle with the surrounding environment, in the vehicle for the corresponding operation instructions, such as the manipulation of the shift lever to change gear, the steering wheel to make the vehicle steering, etc., to make real the corresponding changes in the environment of the vehicle movement state, to realize the remote control of the real vehicle. At the same time, in order to eliminate the blind area of vision, radar and sensors are installed on the real vehicle to make the vehicle have certain autonomy. Compared with self-driving technology, vehicle virtual remote driving technology is not real men out of the vehicle control, remote issued a series of control actions, but by operators and through the virtual environment of actual vehicle monitoring control, can not only realize "unmanned" of the vehicle driving, effectively improve the remote vehicle safety performance, separate the drivers and vehicles, And can truly realize the vehicle unmanned.

The models in the virtual scene, including sky, ground, vehicles and other objects, are independent of each other. In the interactive control process, the viewpoint (virtual vehicle) can directly pass through each object. However, in real life, it is impossible for two impenetrable objects to have the same spatial region. Therefore, Collision Detection can be used to determine whether there is a Collision between different objects in the virtual scene at a certain moment [23]. However, the current collision detection technology does not meet the needs of detection between arbitrary objects, and is still limited to regular geometric convex bodies. Therefore, it is of great significance to study the collision detection technology that meets the requirements of virtual driving environment.

At home and abroad are analyzed in this paper, virtual driving and unmanned vehicle the characteristics of the remote control, combining with the driving environment variety, vehicle dynamics model in simulation accuracy as well as the actual driving demand such as immersion, interaction, to improve traffic safety, this paper introduces the virtual reality environment remote driving of the vehicle frame, analyzes the related key technologies, The future development based on virtual remote driving is described.

[19] Li Mingkun. Development and Application of Virtual Driving System Based on Unity3D [D]. Zhenjiang: Jiangsu University of Science and Technology,2017.