Abstract: In this paper, the characteristics of mini-LED and micro-LED are discussed, and the shortcomings of micro-LED are pointed out. Thus, the application of quantum dots in micro-LED is introduced.

In the early hours of April 21, 2021, Apple held its annual spring event, which ended with a new version of the iPad Pro. The key performance upgrades are the M1 chip, 5G network and a long-rumored mini-LED material that is said to rival Apple's top-of-the-line professional Display, the Pro Display XDR. To achieve extreme brightness, the back of the display is filled with an array of 10,000 LED backlights, as shown in Figure 1. To fit so many leds into the iPad Pro's thin body, Apple chose a specially designed mini-LED, which is 120 times smaller than its predecessor. At the same time, custom optical films and diffusers are more efficient at mixing light, making it possible to achieve this design in a thin body of just 6.4mm. Mini-led is essentially LED technology, also known as "sub-millimeter light-emitting diode". It is the technology product of LED miniaturization and matrixization. The chip size is between 50 μm and 200μm. Although it is a kind of LED technology, mini-LED has smaller particles than traditional LED. For example, with the same LCD screen, mini-LED can be inserted into more chips, which can maximize the performance of TV LCD panel and bring high-definition and comfortable visual experience, as shown in Figure 2. It has the characteristics of high resolution, high brightness, high contrast, wide color gamut, and is thinner, energy-saving, and allows accurate dimming, and does not produce LED backlight problems (halo), but also strengthens the OLED panel competitiveness [1]. 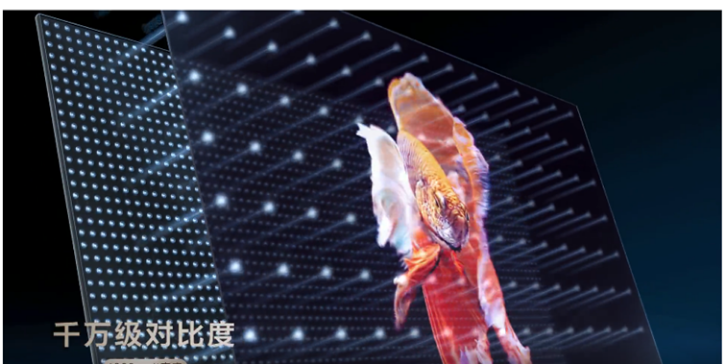 As mini-LED is between traditional LED and micro-LED, it is an improved version based on traditional LED backlight, and it is also the best alternative product in the development process of micro-LED with relatively mature manufacturing technology. This is mainly because the yield of key micro-LED technology has been unable to rise, resulting in the change of mini-LED as a new generation of display technology to replace the traditional LED. The yield of the manufacturing process is relatively higher than that of micro-LED, and it is easier to mass produce, and it is easier to be used in the LCD backlight market in large numbers.

Micro-led refers to "micro-light-emitting diode", which is smaller in size than mini-LED. The key technology is huge transfer. Since micro-LED does not need backlight module and optical diaphragm, and uses inorganic materials to form luminescent layer, it is not easy to appear OLED imprinting defect, and its penetration rate is better than LCD and OLED, which is up to 90%. It can also make displays use less power. Micro-led technology is the ultimate development form of mini-LED and the next generation of revolutionary display technology. Figure 4 shows the size comparison between traditional LED and micro-LED.

To put it simply, micro-LED is to weld all the micro-light-emitting diodes to the TFT substrate, and the volume of each micro-LED crystal is less than 30 microns. For example, the number of pixel points of 1080P screen is as high as 2.07 million, and the number of 4K screen is as high as 8.29 million. Micro-led has so many advantages, but the technology is not mature at present. The biggest challenge is the sheer volume of transfers, as shown in Figure 5. The mass transfer technique involves welding a number of ultrafine LED grains on a TFT substrate of 1cm² or other size. 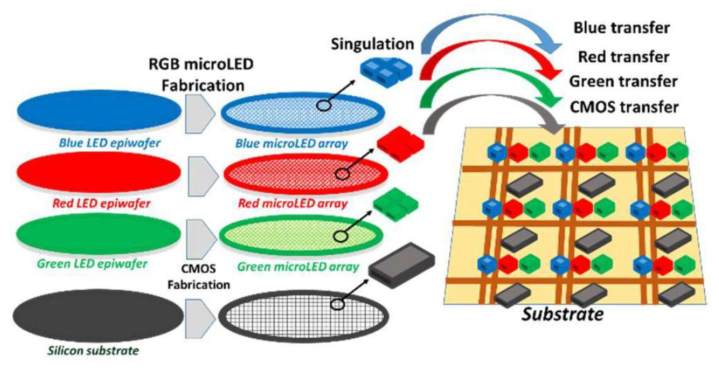 Making leds small requires wafer level processing. Moreover, the production process is very demanding, and it is not easy to accurately attach micron-sized LED crystals to the substrate, which will lead to low yield. Even if the production is successful, the cost price is too expensive for manufacturers and consumers to afford. It is estimated that the popularity of micro-LED technology, improving yield and reducing cost will be possible as soon as 2027. Figure 6 shows an active matrix micro-LED microdisplay chip on a 4-inch wafer. As for the advantages of micro-LED, it has high brightness, high contrast, high resolution, high reliability, fast reaction time, more energy saving, theoretically lower cost, better environmental adaptability and other characteristics. In terms of power consumption, it is lower than LCD and OLED, and its brightness is also self-illumination display, and the brightness of micro-LED is 30% higher than THAT of OLED. It is suitable for vehicle, industrial and military fields [4].

It should be pointed out that the concept of "micro-LED" does not exist in the field of backlight applications, and only in the field of direct display is there a battle between mini-LED and micro-LED. Mini-led refers to chip size between 50 and 200μm, with sapphire substrate products; Micro-led refers to products with chip size less than 50μm and without sapphire substrate. Table 1 shows the performance comparison of small spacing LED, mini-LED and micro-LED.

Third, the combination of quantum dots and micro-LED

At present, micro-LED has the following problems: The first problem is that LED surface defects reduce the luminescence intensity: size decreases, and total perimeter area ratio increases. The solution is to improve the surface defects by heat treatment, acid treatment, passivation treatment. The second problem is that chip design is complex: mainly due to the huge amount of transfer of technology, different operating conditions, and different materials and structures. In view of the second problem, the industry has introduced "quantum dot color conversion technology". FIG. 7 shows the comparison between the mass transfer technology and the color conversion technology. 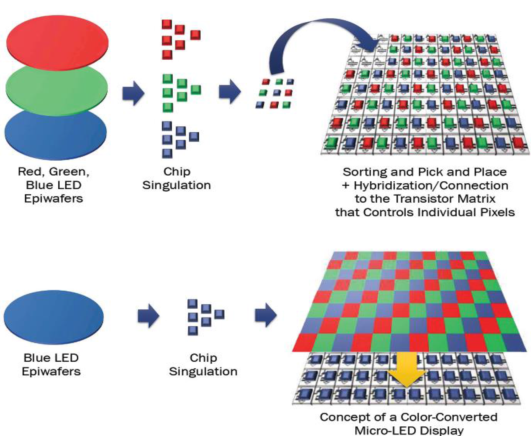 Quantum dot luminescent materials have been used in different display technology fields because of their high color purity, adjustable color, good light stability and long life. Among them, the most widely used and the most mature technology is quantum dot photoluminescence. For example, quantum dot color conversion technology is used in LCD, micro-LED and OLED to improve the display color gamut range, color purity and reduce manufacturing costs.

The advantages of quantum dot color conversion technology applied to micro-LED are: high color gamut and high color purity can be achieved; No red and green LED chips are needed, only blue LED chips are needed; Reduce the cost of display chip; Greatly simplified circuit design; There is no need for huge transfer of red and green, which improves production efficiency. However, at present, this technology still has some disadvantages, such as reliability, luminous efficiency, and the presence of heavy metal elements in high-performance quantum dots, all of which need to be solved.