Summary of the research status of virtual reality

1 The concept of virtual reality technology

Virtual Reality (VR, abbreviation) is a new computer technology developed from computer vision, simulation technology, human-computer interaction and other information technologies. By separating the vision from the real world, people can be immersed in a completely virtual world through the display device.

 distributed: VR and the integration of network technology, in the same VR environments, multiple users can share any information to other.

 immersion: with the help of various types of input devices and output devices, giving users a completely, fully participate in the environment.

 reinforcement: will the world of virtual reality simulation stacked together with the real world, users need from the real world can raise awareness.

Immersive VR technology is a hot spot in VR technology at present. Figure 1 shows the technologies being used for immersive VR. As shown in Figure 1, 76% of current research uses high-end HMDS technologies, such as Oculus Rift or HTC Vive, and many of these high-end VR systems use a variety of supporting tools, such as controllers, trackpads, and haptic feedback. Among the VR technologies applied, a few studies have used low-cost mobile VR technologies, such as smart phones and Google cardboard as VR environments [6]. Only a few articles use augmented VR, for example, Veronez et al. use extra G27 racing wheels to control the VR environment [7]. The other 2% of articles did not specifically mention VR technology. It should also be noted that in some experiments, both techniques were used simultaneously, which resulted in more papers being counted than they actually were. Overall, high-end HMDS technology is the most commonly used immersive VR technology. 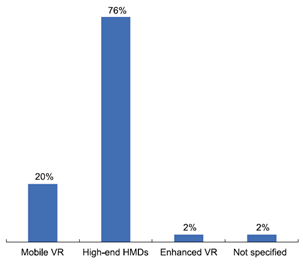 Figure 1 VR technology in use

4.2 Problems existing in the development of virtual reality technology [8]

The current primary audience for VR hardware is the enterprise market, and there is not a single "consumer" VR device. It wasn't great, there wasn't a good enough way to do it, for the most part you couldn't see your hands and legs and use them in an interactive way, and most of the time VR was aimed at developers. The following are some of the major problems in VR development:

VR virtual reality technology has been developed rapidly, but the penetration rate of this technology is not high, not only because of the cost of VR virtual reality technology, but also related to the hardware level. The mobile experience of VR technology is not good due to the problem of screen technology. Relevant screen resolution and refresh power need to be further improved. The level of existing VR hardware devices is still in the primary stage. Some hardware devices occupy a large area and are not beautiful enough, so they cannot provide users with better texture services.

The production cost of VR virtual reality is relatively high. Although the hardware level of VR virtual reality technology has been constantly breakthrough, the relevant software production has not been followed up sufficiently, and the cost of related software production is relatively high, so the effect of large-scale and comprehensive circulation cannot be achieved at present. Due to the lack of content of VR technology related products, the content cannot effectively attract the attention of users, thus affecting the promotion of related products.

Based on the development trend of VR in recent years, it can be judged that the size of VR market will be further expanded in the future, and the business model will be gradually optimized. In the future, VR devices will be more and more portable and small, and the spatial positioning ability will gradually increase. In the future, VR technology can help users quickly virtualize the surrounding environment in a limited space; Combined with the transmission capacity of 5G network, the efficient transmission of spatial information is realized, so that VR technology can achieve the effect of live broadcasting. In this way, virtual interaction can be carried out through the network without human presence, and the traditional face-to-face class will be shared to the maximum. It can even be extended to the security field. For example, VR and 5G technology can be used to solve the hidden safety problems of drivers and passengers in hitchhiking.

Currently, there are four kinds of VR technologies: desktop, distributed, immersive and enhanced. Each of these four technologies has its own advantages and disadvantages. In recent years, the application of VR development has focused on computer, clinical medicine, education and other fields. In the popular immersive VR technology, most of the research uses high-end HMDS technology. At present, VR development is not mature, there are still immature hardware technology, high production cost, lack of operation mechanism and other problems, but because VR has a wide range of application prospects, coupled with the rapid development of 5G technology in the future, it can be judged that VR technology will be integrated into every aspect of life in the future.

[5]Richard Reading. A systematic review of interventions for children with cerebral palsy: state of the evidence[J]. Child: Care, Health and Development,2014,40(3).

[9] CAO Fan. Overview of the Development Status of VR Technology at home and overseas [J]. China Science and Technology Information,2019(05):36-37.